Salzburg, the picturesque Austrian city, is not only the birthplace of Mozart and a world-famous festival site, it can also delight visitors with its special location on the banks of the Salzach in the basin between the city mountains. In Salzburg you will find everything you need for a successful city trip. And since Salzburg is also located directly on the German border in the Alps, it is a perfect destination for your romantic weekend trip.

In this article I will give you lots of Salzburg tips for your weekend in the Austrian model city and also tell you in which hotel you can stay overnight. 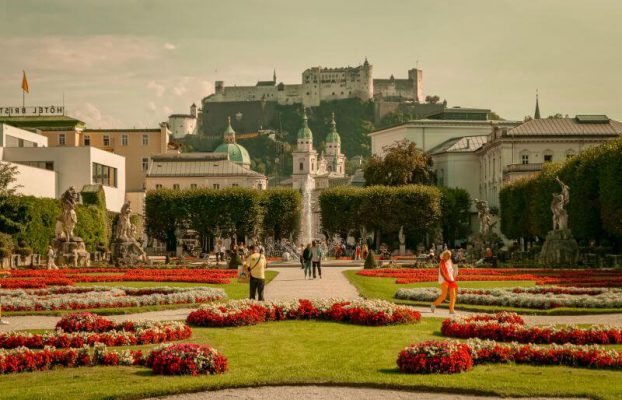 The first Salzburg tip right at the beginning: Get the Salzburg Card.

Because with this you get:

Due to its history and the many cultural influences, Salzburg can also offer some interesting tours. Here you can find some examples:

But if you want to explore Salzburg on your own, you will find below and also on the map my Salzburg tips for a weekend:

The Mönchsberg dominates the cityscape because it is located in the middle of the old town and stretches about 1.7 km through Salzburg. From up here you have a perfect view over the whole of Salzburg and its surroundings from many vantage points. The many hiking trails along woods and meadows also invite you to take long walks. 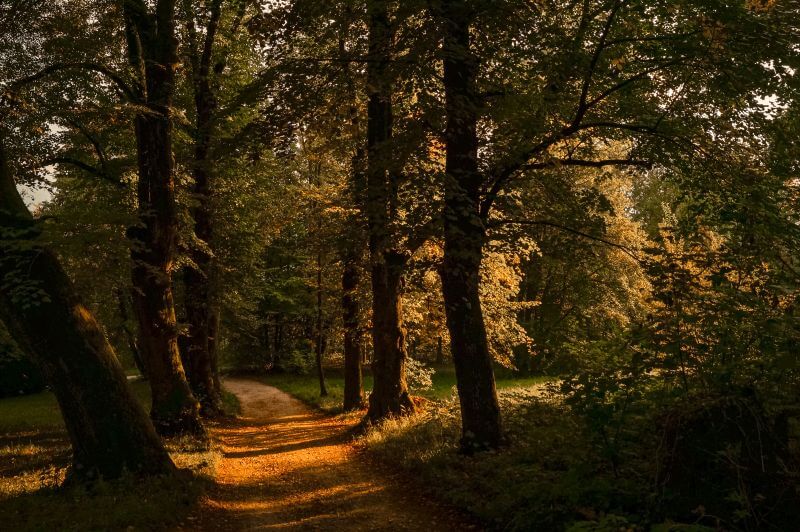 In the middle of the city on the Mönchsberg: Idyllic paths invite you to go hiking 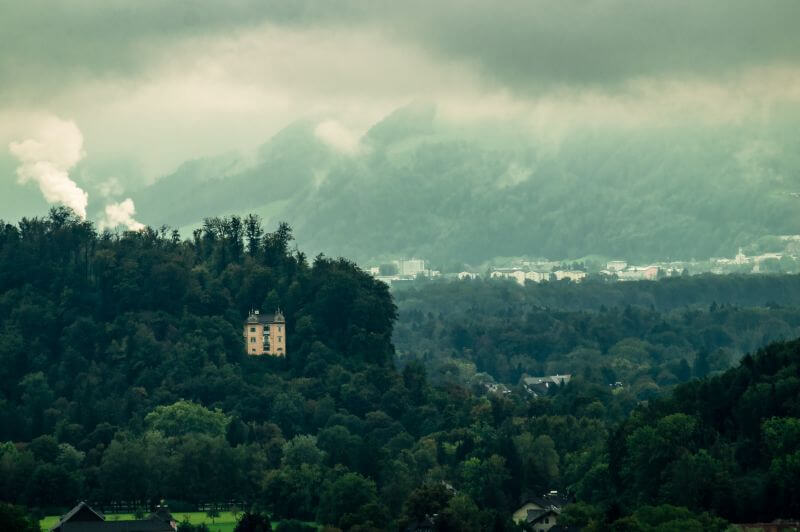 From Mönchsberg you can also see the Folklore Museum near Hellbrunn Palace.

2. Stop for a bite to eat in the Zirkelwirt

The Zirkelwirt is a traditional house in a quiet location a little away from the center at Papagenoplatz and belongs to the culinary Salzburg tips in this list.

There is a very nice beer garden here. From the menu I can recommend the spinach dumplings – this is a good vegetarian option to the plain, rather hearty and meat-centered food in Austria.

3. Stroll through the mirabelle plum garden

The Mirabelle Garden is one of the most beautiful urban gardens in Europe. It is aligned exactly with the castle and is decorated with many impressive statues and sculptures. That is why it is also a listed building.

The Mirabell Castle is also worth a visit.

Once you are in the garden, you should also take a look at the Marble Hall in Mirabell Palace. Mozart already played music in this magnificent room. The hall is also a very popular place for weddings. The entrance is free of charge. 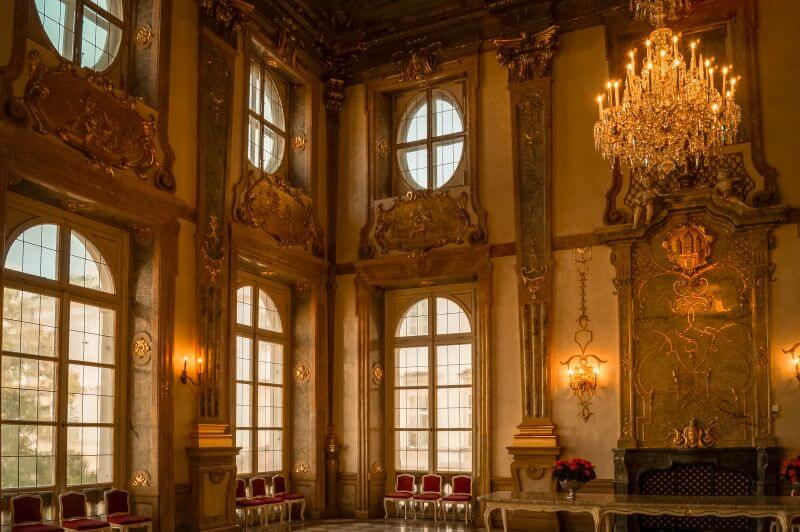 Also very beautiful, but somewhat hidden in the southern part of the castle, is the orangery. Here you can relax away from all the hustle and bustle in the garden. 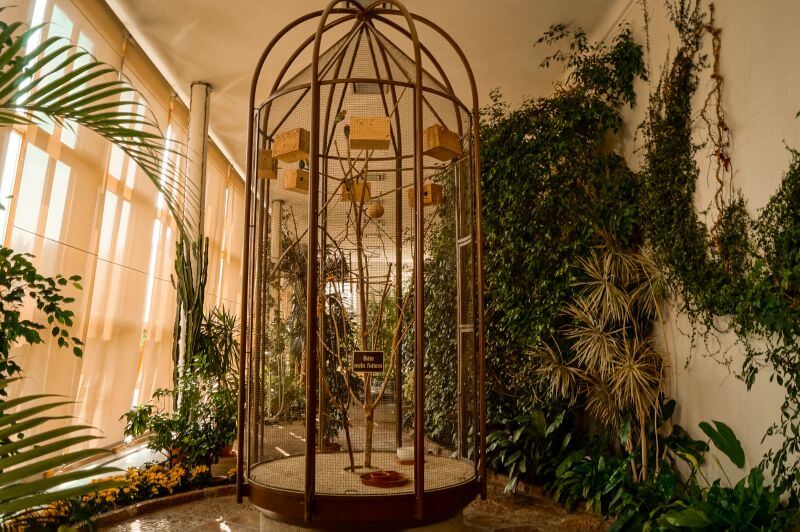 The orangery: There is a large birdcage and a small fountain with fish.

4. Drink a “Verlängerter” in the Café Bazar

A “Verlängerter” is the Austrian word for a cup of coffee. And in Salzburg it is probably best to drink it in the historic Café Bazar. Celebrities such as Marlene Dietrich, Romy Schneider and Tomas Mann have been guests here. 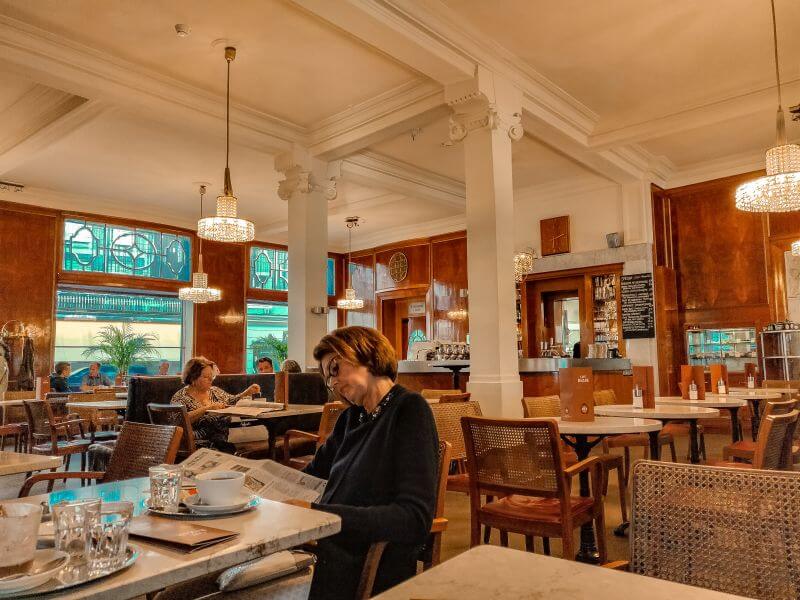 The interior of the café has the special Austrian coffee house atmosphere that reminds of a bygone era.

On the seats outside by the river you have a great view of the bustling activity along the shore.

5. Walk across the Love Lock bridge

The bridge with the many locks is a popular photo spot – not only for Instagram. Because from here you have a great view over the bank along the Salzach. 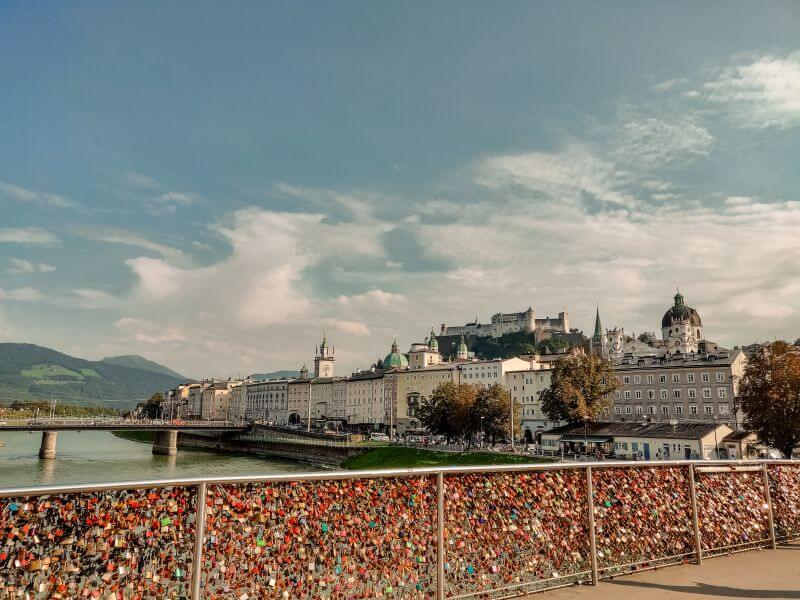 Better than the locks: The view over Salzburg.

6. Read the stories in the St. Petersfriedhof

Right next to the cable car at the foot of the fortress mountain you will find the somewhat hidden and inconspicuous entrance to Petersfriedhof.

The Petersfriedhof lies directly below the Hohensalzburg.

In this cemetery some centuries old stories are buried. Maybe that is why it radiates such a special atmosphere.

As I stroll through the cemetery and read the gravestones, the same questions come to my mind again and again: “How did these inhabitants once live here in Salzburg? What did they once do to make it to this cemetery in the middle of the city?” Matthias

Some of the stories can be guessed at least in part from the sayings on the boards.

From the cemetery you get access to the catacombs carved into the mountain for 2 €. There are two chapels in the catacombs – shown here in the picture by the windows in the rock.

To visit Salzburg without tasting the Salzburger Nockerl is not really possible. So it’s best to find a restaurant that offers the traditional dessert and treat yourself to this Austrian dessert classic.

I myself was in the restaurant at the Hotel Elefant and got these delicious Salzburger Nockerl for 14,90 €.

The St.Peter Stiftskulinarium is the oldest restaurant in Europe. It was first mentioned in a document in 803. So guests have been served here for about 1200 years. The restaurant consists of 11 rooms, some of which are built into the rock of the Mönchsberg.

The entrance to the St. Peter Stiftskulinarium.

You will be served upscale food that cost accordingly, but which has also been awarded two hoods by Gault&Millau, for example. So a dinner here is a special experience.

The Domquartier is a museum complex and a cultural highlight on a Salzburg city trip. You follow a predetermined path which leads you through the following areas: 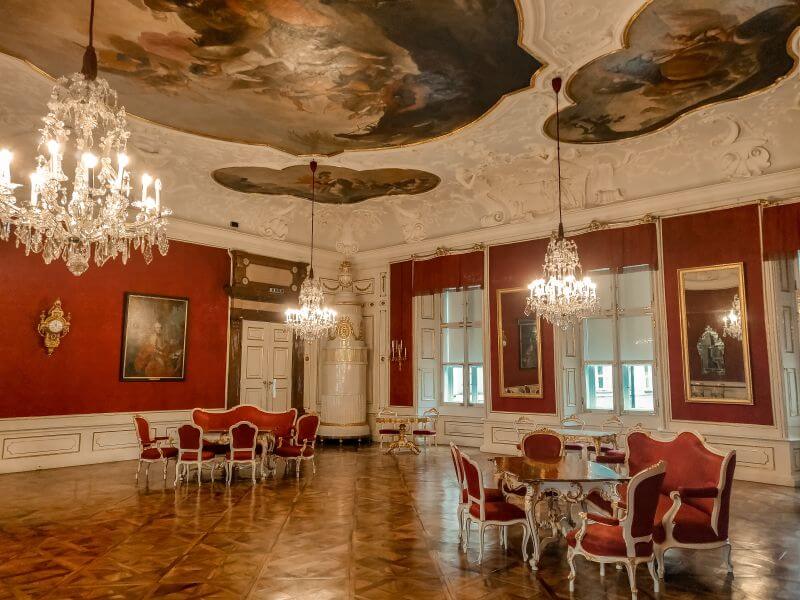 I found the state rooms of the Residenz in Domquartier particularly impressive.

It is the perfect place to visit in bad weather. But you shouldn’t miss it even in sunshine. Admission costs 13 €. There is also an audio guide. Here you can get your tickets for the Domquartier already online.

I also found the view over the city from the rooms or the Dombogenterrasse especially cool. 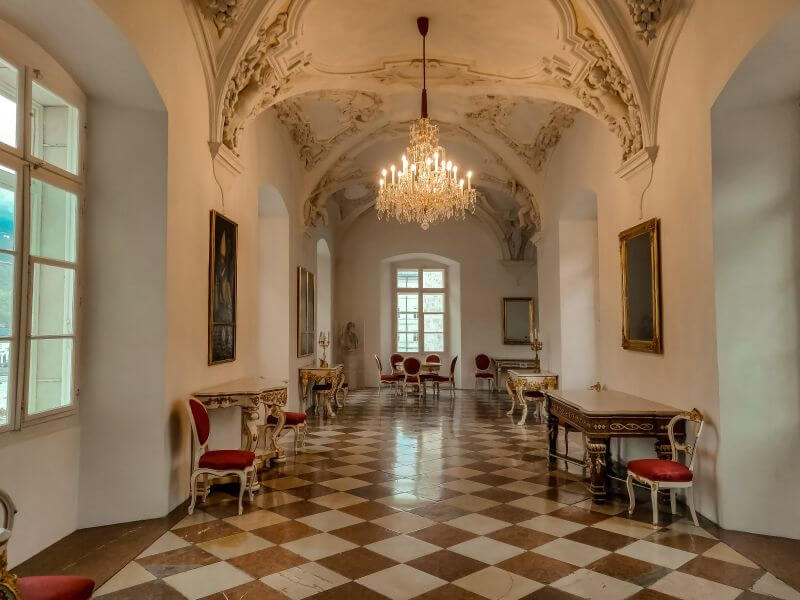 Even the corridors from one room to the next are extremely pompous.

The fortress Hohensalzburg is the landmark of the city and you should not miss it, not only because of the fantastic 360-degree panorama of the city that awaits you on the top. 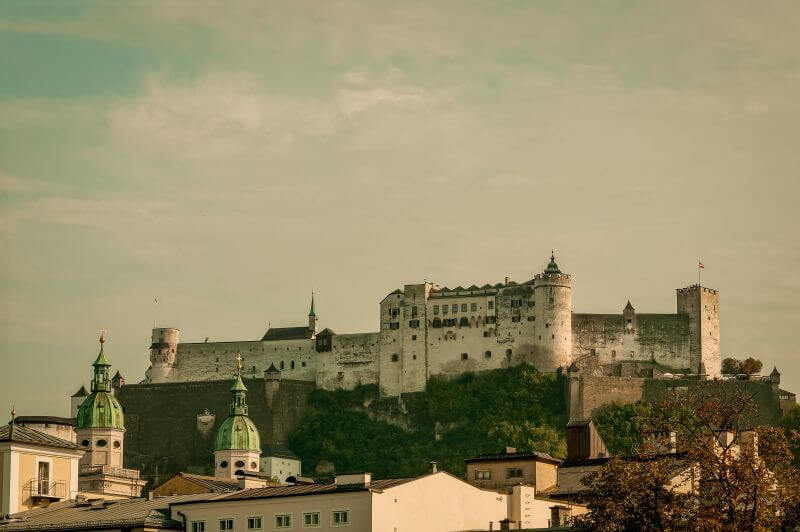 The landmark of Salzburg.

The castle became particularly famous during the time of Leonard von Keutschach, who was archbishop of Salzburg from 1495 to 1519. Keutschach also lived at the castle. You can still visit his rooms (the Fürstenzimmer) today and learn some exciting stories about that time.

Well preserved princely rooms: At one of the columns you can still find the remains of a long past battle.

There are also several museums inside the complex:

A great hotel in the middle of the city is the Altstadthotel Amadeus. The boutique hotel has 4 stars and is located directly on Linzer Gasse – a promenade with many stores and restaurants. From here you can easily reach all the highlights of Salzburg on foot. 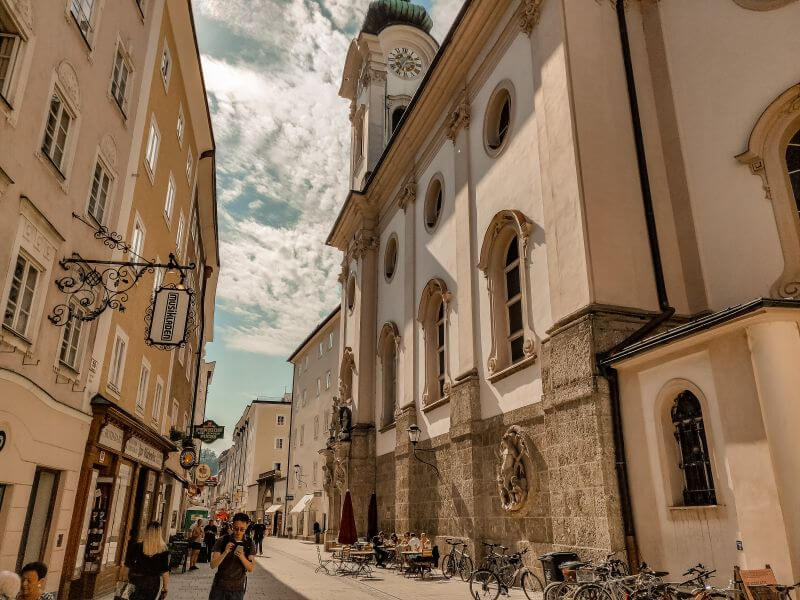 I especially liked the sun terrace in the hotel where you can enjoy your breakfast or a glass of wine with a view into the greenery.

Right next to the hotel is the quiet Sebastian’s cemetery, which you can view from the sun terrace.

The rooms were absolutely first class with many small details, such as the paintings on the walls. 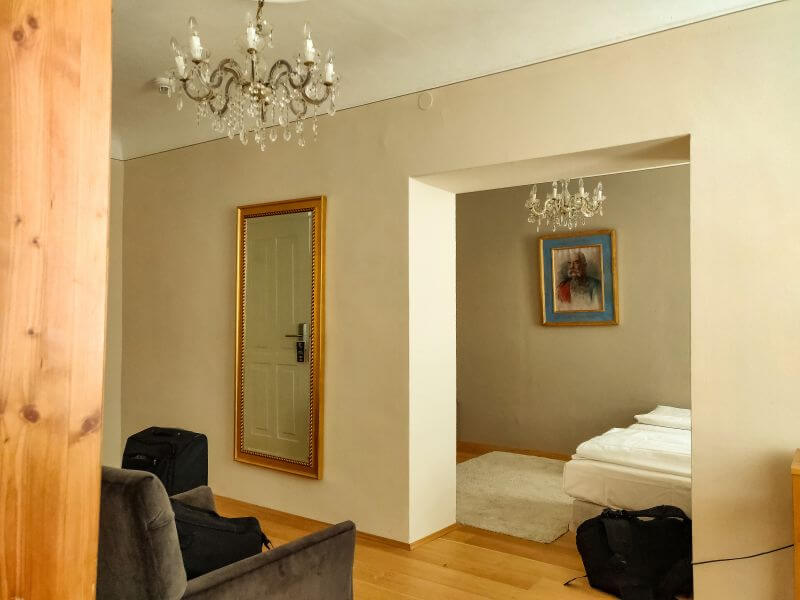 The furnishing of the rooms: lots of space and well thought-out details.

Only about 40 minutes by car from Salzburg is the fantastic Königssee. Here you can go on numerous hikes in the national park, take a boat to the other side or swim in the clearest water in Germany.

The highlights in Salzburg mentioned here can all be explored in one weekend. But there is much more.

Here is an overview: 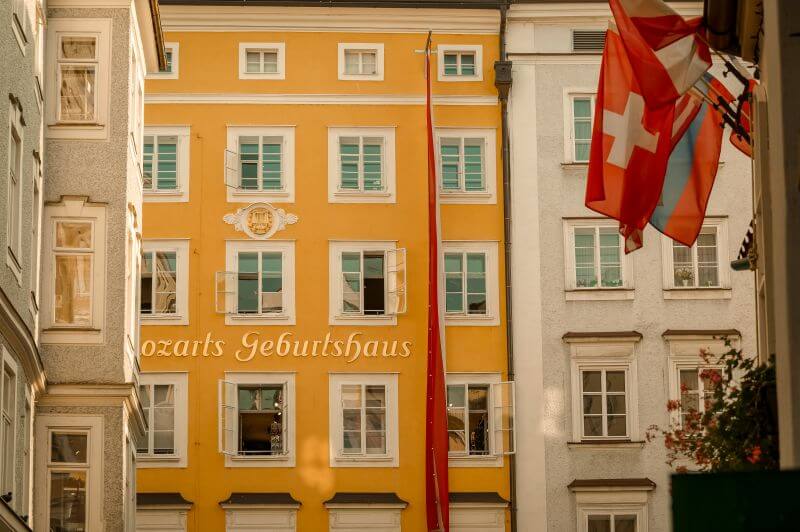 A classic in Salzburg: The birthplace of Mozart.

Which other sights in Salzburg should be on the to-do list? How was your visit in Salzburg? Looking forward to get your comment. 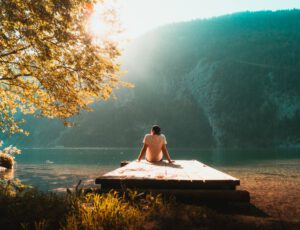 Hidden Gems: The coolest Düsseldorf attractions, that only locals know

A weekend at the Baltic Sea - The best Ahrenshoop attractions

This is Germany's largest island – The 18 best Rügen attractions, that you shouldn't miss